It's been the better part of a week now with the Atreus and things are going... okay. I was both surprised at how easily some parts of the transition have come across and how difficult others have been. Typing prose has been pretty smooth sailing, with the exception of the x and c keys which I surprisingly can type at speed, but as soon as I slow down I start to confuse one for the other. Programming has been pretty painful, like I mentioned last time. Sometimes it feels like I'm thinking so hard that I am going backwards, hopefully remapping some of the keys will make a bit more sense to my hands, the journey is ongoing.

The Atreus is programmed through its Kaleidoscope interface (Docs), which looks like an arduino library written in C (but don't quote me on that) and Keyboardio has kindly made a graphical editor available called Chrysalis, keeping with the butterfly theme. Thus far I have only used Chrysalis to program this keyboard. There are capabilities that cannot be accomplished through the GUI which is not a problem at the moment, as I am keeping things pretty simple. 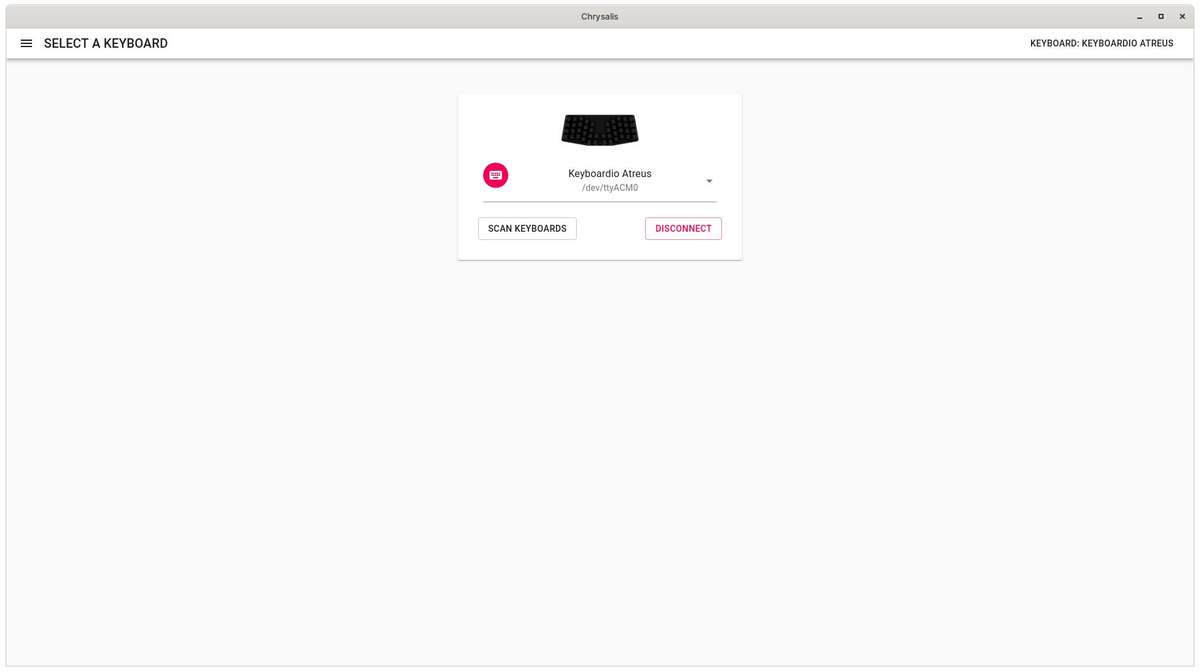 With your keyboard connected, opening Chrysalis shows you a list of keyboards you can connect to in order to begin editing. I only have a single keyboard compatible with Kaleidoscope, so I only had one option available. Pressing connect brings up a picture of the keyboard. Clicking any keycap gives you the ability to change its function. You could do whatever you want on the initial layer, aka Layer 0, but I imagine most people will stick with the basic alphabet in their current language. Like the savage that I am, I have stuck with QWERTY as my keymap but have since modified the thumb row quite heavily.

The Atreus has up to 10 programmable layers. I am barely using 3 of them in addition to Layer 0. I suspect that until I start heavily modifying and getting into advanced features, that I won't have much going on any layers except for Layers 0 & 1. 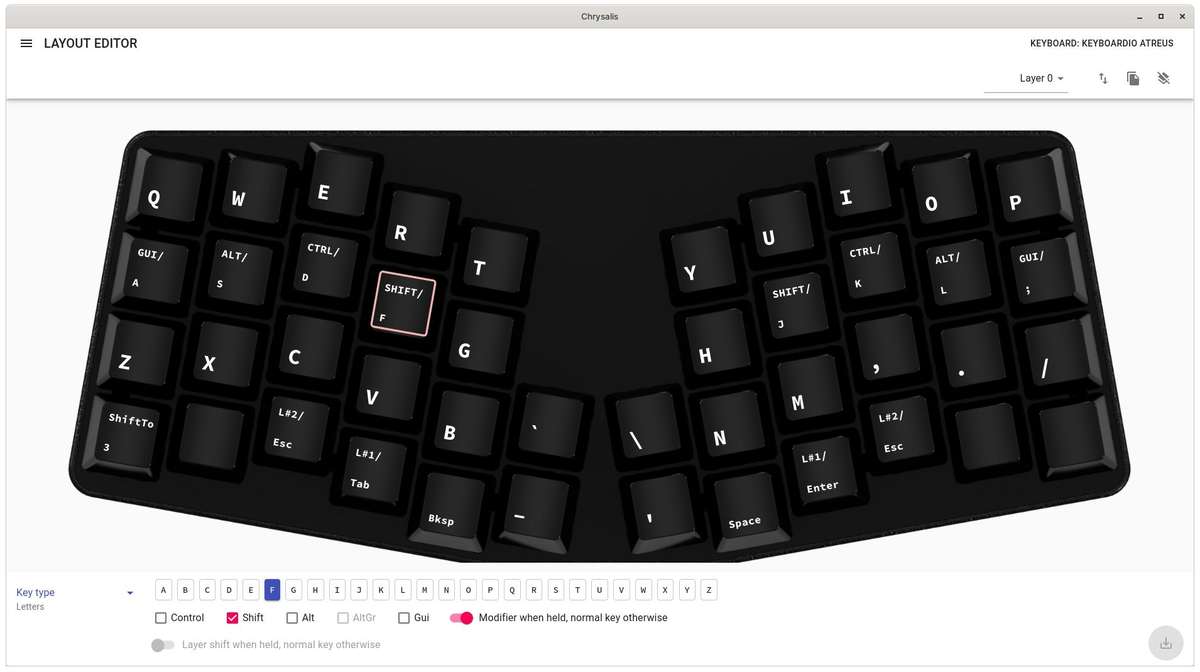 You can see on my Layer 0 most of it looks fairly comprehensible. Letters are oriented in QWERTY, like I said before, and I am currently trialing the hyphen and quote symbol keys in the middle. Having them under my right palm and reaching them with my thumb caused no end to typos in my writing and code. Each of the inner thumb keys are a stretch and are pretty unnatural to reach without some mental effort. I can see now why this key layout isn't widely copied in the custom keyboard world.

The next keys in on the bottom row are my backspace and space keys, respectively, these are the same as the original mapping, though I try swapping them constantly because I have difficulty feeling them, more on that later. Continuing my tour, heading outward from the center, left then right, I have the tab and enter keys when tapped and when held trigger a shift to Layer 1. 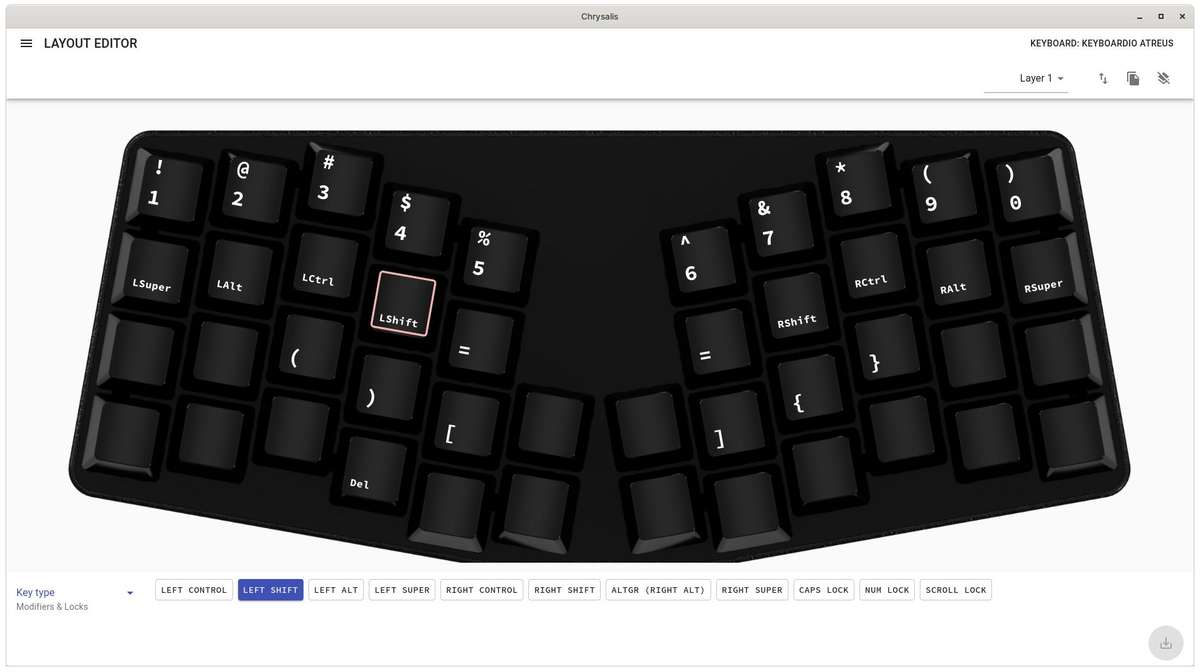 Layer 1 is where I keep my numbers and useful special characters. I have yet to find a configuration of brackets that feels comfortable without thinking, yet. Next are mirrored esc keys when tapped and when held they shift to Layer 2 which is the navigation layer (naturally the arrow keys are arranged following the Vim directional keys). Most of the rest of the keys are blank for the time being with the exception of the far left bottom row key which shifts to Layer 3 and I am experimenting with this being a numpad emulating layer... haven't used it much if I am honest. 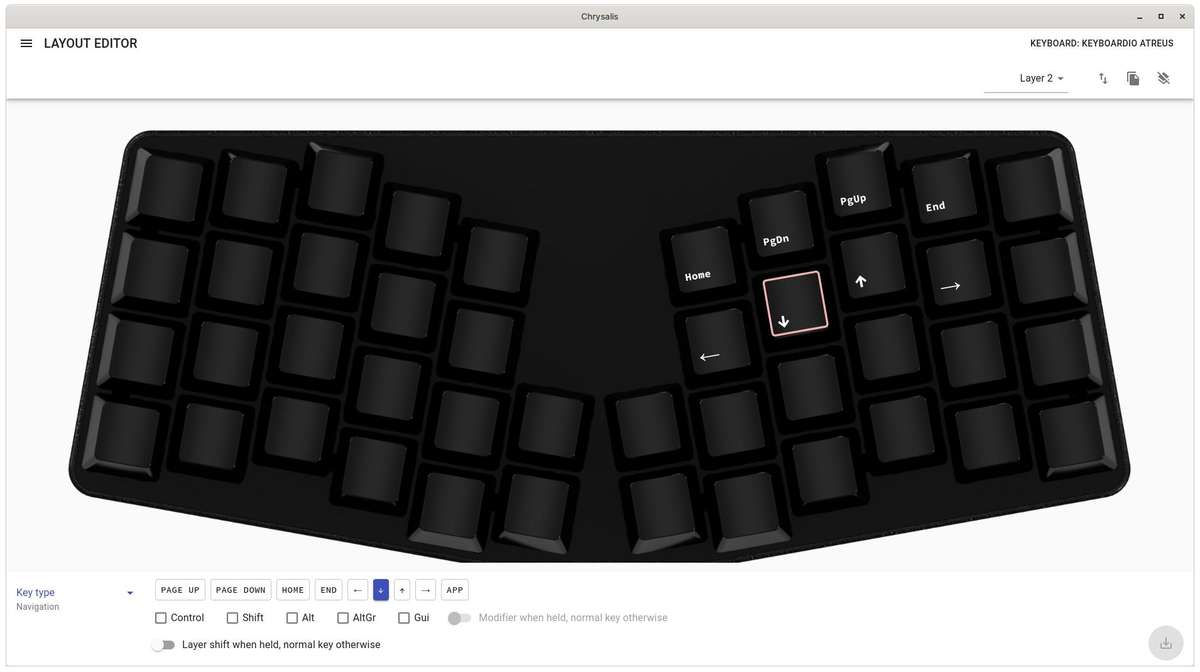 I mentioned earlier I make a lot of mistakes feeling around with my thumbs. I tend to rest them inconsistently, moving from the space to the enter key and vice versa on my right hand as an example. The included key caps are flat and there is no sculpting between rows. My thought was to get another set of key caps with a sculpted profile, say like MDA or SA, and use a couple extra keys from a different row to help my thumbs "feel" if they are resting on say space or enter. Maybe I can cheap out and get a few novelty keys instead of a whole set. For now I have settled on the cheapest/laziest solution which was to remove the key caps entirely from tab and enter, and type directly on to the stems. There is now a very large pronounced difference between the two that I can definitely feel while my big dumb brain learns the layout.

Okay, on to the weird part: the home row modifiers. I have mirrored the most commonly used modifier keys underneath my left and right hands on the home row. Tapping any of the letters, say the j key, will input that particular letter, but holding that key will turn it into a modifier; in the case of the j key, it will become a shift key. From the centre of the keyboard outward, those modifiers are shift, ctrl, alt and super/command/gui. In theory, the keys that you use as modifiers most often will be on your strongest fingers, in Linux that is shift, then ctrl and on macOS command would replace ctrl. It is surprisingly easy to break into. I'm not confident that I used both shift modifiers on my previous keyboard but you have to out of necessity here and again, I am very happy with this choice. Remembering fingers are responsible for ctrl and alt is another matter, that hasn't fully sunken in yet.

A bad habit to watch out for is potentially activating a modifier key while typing because you have removed your finger too slowly. I have window movements bound to Super+h/j/k/l so if I don't pick up my pink fast enough after typing an a there is the chance I could switch focus to another window. Annoying, but a habit I am picking up on.

I think that is it for my key map modifications so far. I have included pictures throughout so you can see what I am talking about. If you have any cool ideas or modifications that work well for you, I am very interested to hear about those as well.

Fun fact, on day two I crossed the boundary between using this layout and other keyboards. I am definitely shocked to have entered no man's land so quickly. The goal was always to rely on the super portable keyboard as my only input (I work from home) and on the rare events that I travel, I can pop this cute boi into my bag and take it along with my laptop. My wife already thinks I look like a dork using an old Thinkpad, so why not lean into the stereo type a little more lol.