I have some pretty serious intellectual crush on Patrick after this interview.

Sean C. Davis of XFCE and Xubuntu fame, talking about his next steps focusing on the Elementary OS project. I share a similar passion for Elementary, but It is a bit of shock to see someone of relative renown in this community shift focus to another project.

Necessary reading. I'm looking at my frontmatter for this link, which has survived 4 "flat file" site generators (before static site generators was a term of art, every system that used files instead of a database fell under the umbrella of "flat file") and seeing many properties that could instantly be tidied up.

Necessary reading. I'm looking at my frontmatter for this link, which has survived 4 "flat file" site generators (before static site generators was a term of art, every system that used files instead of a database fell under the umbrella of "flat file") and seeing many properties that could instantly be tidied up.

Not sure why the WebKit team wasn't sold on Google's VP9 based photo and video codecs, whether it was to see if the claims that they really were unencumbered by patent claims, marketing reasons, or something else entirely. Either way, the three main web rendering engines have reached consensus, webp and webm are codecs you should consider for your image asset pipeline... just as successor AV1 based formats have begun to rear their heads 🤣

A local REPL, like Codepen or JSbin, but entirely in VSCode. No need to setup a project, bundled, tool chain, etc. to prototype an idea. It works with svelte too!

What do you get when you mix Second Life, Zoom and Animal Crossing? A twee virtual events space, courtesy of the Internet's own Andy Baio (also of XOXO fame). For a quick overview, see the video on Andy's announcement post.

The article is a-okay, but for whatever reason, this paragraph caused something inside me to stir:

“Time is the fire in which we burn,” says the poet. It is our most inflexible and valuable commodity, the one thing with which you should not be generous. Squander money, you may earn it back. Squander time, it is gone forever.

Watching Mozilla sink is a real shame. As someone who uses Firefox everyday for my job, I will be sad to see such a well considered set of developer tools die. But the feeling goes deeper than that. I once saw the growth of Firefox as the growth of the web standards movement, the bellwether of a healthy and open web. Mozilla was the underdog of that era and against all odds it became the browser everyone was talking about. To watch the whole product fall from grace because of mismanagement is an uncomfortable way to mark the passage of time. 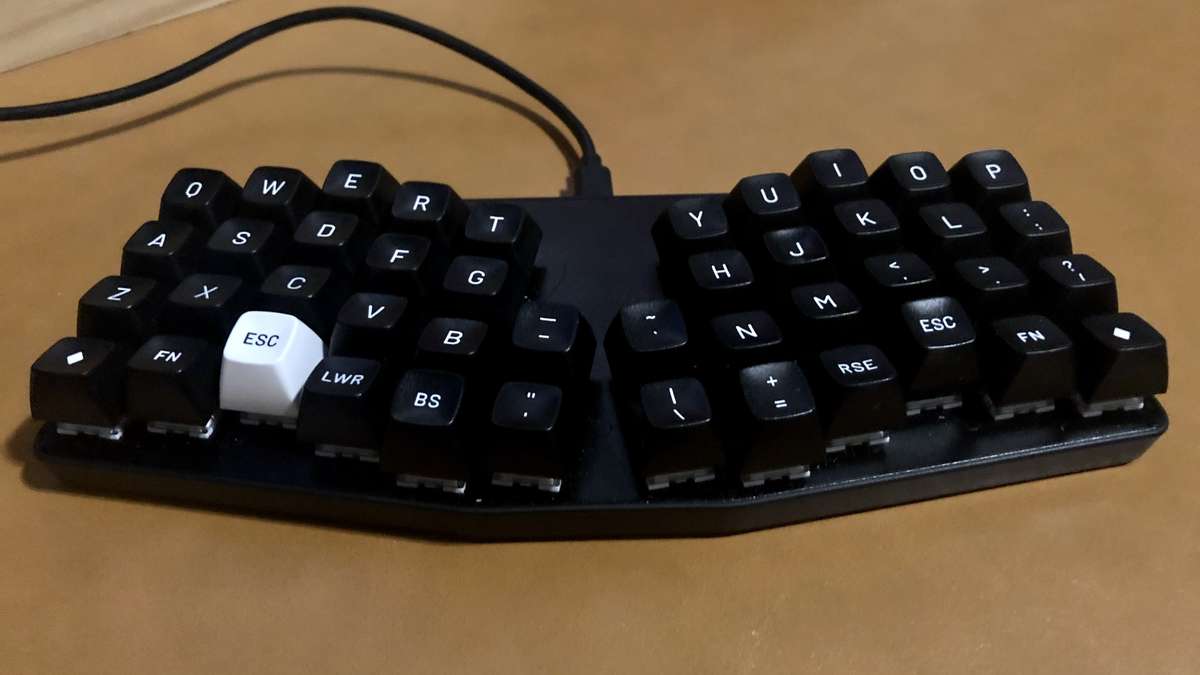 I picked up a new set of keycaps from Drop, specifically the "Drop MT3 White-on-Black Keycap Set" in the ortho kit. My theory has been, the thumb row would be a bit better if I could only feel the difference between a few keys. Before I put this kit on, I had removed the keycaps and typed directly onto the stems of my switches for the "LWR" and "RSE" keys. While that worked, I thought, "Why not throw money at the problem?" And here we are.

This isn't a formal review of the keycaps, I just couldn't help posting a picture of this handsome little boi in its new duds. The sculpted shape of the keys helps a fair bit distinguishing between each row. The homing keys being extra "scooped" out is very effective for finding your place while touch typing.

Ultimately what I bought the entire set for was to distinguish the thumb modifier keys, so I could feel the difference between, say space, enter and escape. To that end they have performed really well. I used the "R1" escape keys to mark out escape and backspace on my left hand and on my right, space and escape. They work great on the bottom row, because contrast to the "R4" shape, they are taller and slant the opposite direction.

I am happy with the set. They look good, sound good and are satisfying to type on. I still have a few bones with the ergonomics of the thumb row (I don't end up using the last two keys on the bottom row for either hand because they are a menace to reach without twisting my wrists and don't even get me started about the inner "thumb keys"), but my typing has come along fairly well. While typing prose, I am back to my previous speed. My coding speed is lagging a bit, mostly because I cannot remember what key corresponds to which pair of brackets... even though I haven't swapped their positions in weeks; The symbols across the keyboard could use a rethink, but I am scared to start over again 😝

Uh oh. Who's got two thumbs and is going to spend their weekend goofing around making themes for their editor?